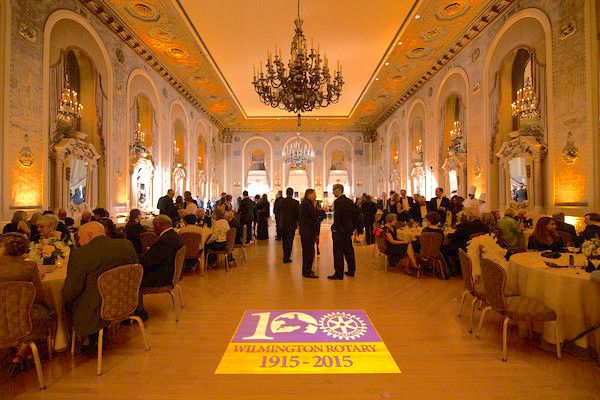 Planning for the Rotary Club of Wilmington Delaware’s 2015 Centennial began in 2003 when the History Committee which I then chaired began work on our Club history. The project was not applauded by the entire twenty-eight member history committee when research jobs were assigned, and within several weeks all but seven members resigned from the committee, citing schedule and other conflicts which precluded them from working on the history. Undaunted, the seven remaining members forged ahead. Rotary International would celebrate its Centennial in 2005, and we decided that a fitting gift to RI would be a copy of our Ninety Year History, a 100 plus page soft cover unillustrated chronology of our Club since its chartering in 1915. We wrote this anticipating that we would use this history as the beginning research for a serious hard bound illustrated history of our Club for our Centennial.

In 2009 then Club President Mike Friedberg asked me to form and chair a Centennial Steering Committee, whose members were Nardy Ableman, Cam Yorkston, Margi Prueitt and Pete Booker. We first adopted a Vision Statement captioned “Honor…Celebrate…Promise,” which read:

The Centennial of the Rotary Club of Wilmington, Delaware is a time to honor our Century of achievement and to celebrate the outstanding service that the Club provides today. Compelled by our legacy, we recognize our responsibility to improve tangibly the lives of those people in our community and beyond who are most in need. This is more than our hope….it is our promise.

The Centennial Steering Committee’s report included detailed recommendations on how we proposed that the Club Honor, Celebrate and Promise for our Centennial. The Club’s Board approved our proposal, appointed me as Centennial Chair, and directed me to form a committee immediately and commence preparations for our Centennial. As we embarked on our work on the Centennial, and especially on our Club history, I realized that I had had the opportunity in my then 37 years in the Club to glimpse, albeit briefly, back to the very beginning of the Club and hence span the Club’s full hundred years. J. Edgar Rhoads, who joined the Club in 1915, the year the Club was chartered, was still a member after 63 years in 1978 when I joined, and there also were members from the 1920s and 1930s who were still active. I now regret that as a very young member I did not have the foresight to hear from these men personally their stories of the inchoate days of the Club.

2012 was electrifying as all committees swung into action. In order to produce a truly excellent history, the History Committee hired a professional author and historian, Dr. Susan Chase, to research and author our Centennial History. We were fortunate not to have waited longer to begin that task, as we rushed to get the final manuscript with all photographs and appendices to the printer in time to distribute the history, Through the Lens of Service, An Illustrated History of the Rotary Club of Wilmington, 1915-2015 by the 100th anniversary of our first meeting in 1914.

Our service project was also launched in 2012. At the suggestion of Delaware State Park’s Chair Chazz Salkin that a much needed project would be the renovation and upgrading of Wilmington’s H. Fletcher Brown Park, Pam’s Service Committee began to put the many needed elements in motion. Bill Holloway offered the services of his architectural firm, Bernardon, Haber and Holloway, and Stephen Mockbee made the services of his company, Bancroft Construction Company, available to advise and to bid the work. There were many political issues to address on both a State and City level, and we organized focus groups among educators, planners and neighbors.

The following year, 2013, our energies turned to raising the funds for all aspects of the Centennial. Two great things happened. Rod Teeple and Richard Flanagan began a successful campaign to raise $300,000 with 100% of club members participating, and Rick Gessner reached into the community to raise corporate funds. While Rod and Richard collected three year pledges from all our members, Jon Hickey’s Rotary Foundation Committee applied for and received a rare “incoming” Rotary Foundation grant to build the education stations at the H. Fletcher Brown Park.

Centennial celebration began in the fall of 2014 when representatives from thirty-two of our District 7630’s 40 clubs gathered with us to fill the Gold Ballroom of the Hotel du Pont with 240 Rotarians to kick off our Centennial year. We were extremely honored to have 2015-2016 Rotary International President Ravi Ravindran celebrate the event as our guest speaker. On December 10th, we celebrated the 100th anniversary of our Club’s first meeting that was held at the Hotel du Pont on December 10, 1914, where the club has met ever since, the only Rotary Club in the world to have met continuously in the same location for 100 years. At that meeting, we unveiled a plaque that now hangs in the hotel commemorating our Club’s 100 years of meeting there. Later, Dr. Susan Chase was our speaker and talked about little known happenings at our club during the first 100 years, and at the end of the meeting our Club’s Centennial histories were distributed.

The capstone event of our Centennial year was the April 2015 black-tie Gala dinner and dance, planned by Samantha’s Events Committee, held in the Hotel du Pont’s Gold Ballroom and attended by over two hundred members and guests. The Gala was held 100 years from the date in 1915 when our Club was chartered as the 148th Rotary club of the now some 35,600 Rotary clubs worldwide.

All of us who worked on our Centennial were privileged to be able to Honor…Celebrate…and Serve our community, as the Club now looks ahead to its second century of service.