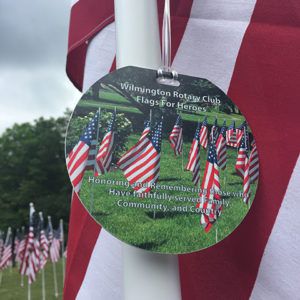 For the second year in a row, the Rotary Club of Wilmington has created a display of hundreds of large American flags at a public park in Wilmington to enable members, their friends and the community to honor their personal heroes. Soldiers, sailors, first responders, parents, mentors, relatives living and dead have all been memorialized on name plaques affixed to each flag.

Don’t get me wrong, it was immensely satisfying to see our Rotary volunteers, friends, family, and even neighbors from the community come out on Friday and Saturday for a few hours to set up this year’s flag display at H. Fletcher Brown Park in Wilmington. The display itself was beautiful on this bright sunny Memorial Day weekend day with 170 flags waving proudly in a slight breeze.

But it was not until I returned later in the day to check and make sure all was ok that the real impact of our work came home in an unexpected way. As I approached the field, seeing again the beautiful waving flags, I noticed a lone figure standing in the center of the display. One of the flags had pulled out its upper link and was hanging down the pole. Both this stranger in the field and I angled toward the dangling flag at the same time.

I noticed he was neither young nor old. He had the look of a young man who had seen more than any young man should of life and probably death. A small pack slung over one shoulder, he had a military bearing but was doing a fairly good job of appearing very much like a civilian. It may have been a while since he put his uniform away. His eyes told me that there were things he could not put away.

He reached up and tried to detach the upper pole to get to the top where the flag had wrenched itself free of its mount. I said to him, “it’ll be easier if we just pull the whole pole out of the base and fix it before putting it back.” I wasn’t sure that he appreciated my advice, so I added, “A group of us set this display up this morning and have had to fix a few already.” He relaxed and we fixed it together.

I thanked him. He looked deep into my eyes and quietly said. “No sir. Thank YOU.” I said to him, “I’m Dave.” He responded, “I’m Nick.” We shook hands and as he held my hand in a firm but polite grip, he repeated, with intensity. “Sir, thank you.” Then he quietly walked through the flags and was gone. I’ll never know Nick’s story and he’ll never know mine. But we shared a moment of common understanding that something important happened this weekend in this park.

Nick’s gift to me was to remind me that I am proud to be an American, proud to be part of this Rotary club, and fortunate to have the opportunity to make someone’s day a little brighter as we pay tribute to those who have served us so faithfully over so many generations.