How Hard Can It Be? 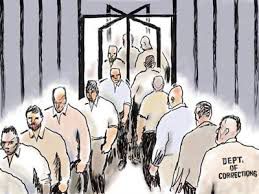 As I waited in the seemingly endless line, watching the clock tick inexorably toward the moment when I would again be closed out before getting the check mark that I so desperately needed to avoid going back to prison, I felt my heart racing, my frustration rising and my anger building. It no longer seemed like just a game. The people around me were no longer friends and friendly faces, but rivals and BLOCKERS whose presence meant that I would fail even though I wanted so hard to succeed – this week, this time.

The District Attorney called “time!” and we all had to go back to our home-seat. Some of us had succeeded, some had failed spectacularly, all of us had struggled and were tense. The “game” was a Re-entry Simulation. About 100 of us, from many backgrounds, men and women, multi-ethnic and ranging in age from 20-something to ninety-something, came to the Hope Commission’s Achievement Center to participate in a well-organized demonstration of the challenges faced by those who leave prison and attempt to once again live in the community.

Most of us didn’t even get to the point of finding work, a place to live, or dealing once again with complex family issues. We bogged down in a round robin pursuit of a few dollars from pawning meager possessions or selling blood plasma to raise enough cash for the precious bus tickets we needed to get to and pay for DMV and identity documentation, mandatory probation check-ins and testing, Alcoholics/Narcotics Anonymous meetings, court-required meetings, and restitution, followed by food, rent and other life necessities.

I did OK my first week. All of the boxes were checked and I even had five dollars left over. I felt pretty cocky. This wasn’t so hard. But I forgot that I needed one more bus pass to get to the place where I was able to sell my plasma to get money for the following week’s obligations, not to mention the bus pass I needed to get to the place to buy more bus passes with the meager cash I held. That set me so far behind in my second week that I was never really able to catch up. I was stopped by a Probation Officer who noted my second week failures, demanded to know why I “fell off” so badly and ended up sending me back to jail despite my protests that none of what happened was my fault. I felt hurt, annoyed and embarrassed all at once.

In Delaware, about 900 of the 3,000 people released from prison each year return to their neighborhoods in two zip codes in Wilmington. Of those 900, 450 are back in prison within one year. By the end of three years another 150 are back behind bars. No more than 300 stay in the community three years after release. In prison, meals are provided daily, no one demands payment, or identification, or rent. Sure, it’s prison, so it is hardly a good place to be. But after negotiating the unbearable demands of the system associated with release, it is not hard to understand why some people entertain the notion that prison is easy by comparison.

I am highly educated, consider myself resilient, self-empowered, motivated, goal oriented. I have run complex companies, met countless challenges and overcome daunting obstacles. But, by the end of this hour-long simulation, I felt truly rode hard and put away wet (as my friends in Texas used to say). The barriers facing someone who wants to turn their life around after prison may not seem huge from our vantage point. But after walking an hour in those shoes, I am amazed that anyone succeeds.

The Rotary Club of Wilmington has committed itself this year to helping reduce some of those barriers for a select group of highly motivated individuals. Small lifelines that we drop into the water will make all the difference for someone who is struggling against this powerful current pulling them back into the darkness of crime and punishment.