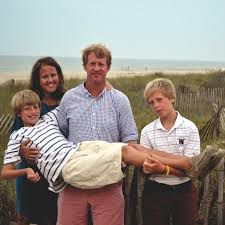 I’ve been fortunate for the life lessons I was taught by my parents. Both the big ones and the little ones. The one I have the earliest memory of is the one I learned the most from: Giving.

When I was young, we gave through volunteering as a family. My earliest fond memory of this was through Rotary when we would sell Christmas trees in the tennis court next to the Boys & Girls Club on Union Street and ringing of the Salvation Army bell on Market Street. Those experiences were the way the Beardwood family got into the Christmas spirit. Giving helps to pass along important values, informs family culture and fosters a sense of caring and responsibility.

Maybe the tree lot isn’t for you. There are other ways to get involved. A donation is the most certain way of supporting Rotary, our service projects and our scholarship fund.

Here’s an innovative giving technique that pays big benefits but few are talking about. It’s called the Qualified Charitable Distribution (QCD). Why hasn’t the QCD gotten much attention? That’s because for nearly 10 years Congress made this provision part of a package of their infamous “tax extenders” which would lapse only to be reinstated, usually at the eleventh hour, for another year or two. This on-again, off-again approach made intelligent charitable planning unnecessarily complex and tricky.

QCDs were first enacted under provisions of the Pension Protection Act of 2006 for a two-year period. In 2008 the Emergency Economic Stabilization Act (also known as TARP) reinstated and extended those rules through 2009. This pattern of lapses and retroactive reinstatements continued until the Protecting Americans from Tax Hikes (PATH) Act of 2015 finally made QCDs permanent. This is important because it allows for proactive and definitive planning opportunities going forward.

Generally stated, a QCD is a nontaxable distribution made directly by your IRA custodian payable to a charity chosen by you. Importantly, the IRS says that QCDs can be counted toward satisfying the required minimum distributions (RMDs) you must take from your IRA. That is, you can use the QCD to satisfy all or a part of your RMD for the year.

What does this tax-speak mean? If you don’t necessarily need all of the annual income you get from the forced RMD coming out of your IRA with its federal and state income tax bite, you can direct a QCD to a charity instead and get the pleasure of seeing the charity you love enjoy your gift, income tax-free.

The mechanics as well as tax reporting of a QCD can be complex and confusing. Westover has guided clients in this endeavor for many years and stands ready to assist.

Giving is good, but smart giving is great! If a cause or charity inspires you, consider a QCD to make the most of your generosity.