A Word from A New Rotarian 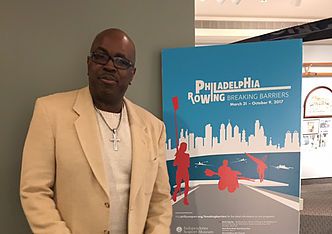 My name is Dwayne Adams, founder and executive director of Breaking Barriers, a nonprofit organization aimed at improving the health of the Wilmington community by encouraging healthy eating and exercise, particularly on the (ERG) rowing machine.

On July 19, 1998, I was accidentally hit in a shootout between rival drug gangs. A stray bullet entered my left eye, leaving me with only partial sight and no sense of smell. During my long recovery, I was introduced to the sport of rowing, and nine months after leaving the hospital I took second place in my first rowing event. In 2002, I won the bronze medal in the World Rowing Championship in Seville, Spain.

Three years later, I founded Breaking Barriers. Although we focus on promoting the sport of rowing among youth in the Wilmington community, we also offer a wide range of services to participants of all ages, including nutritional counseling and exercise programs.